Whether you’re waiting for a few hours or a few minutes, we want to make sure you are comfortable. If you find yourself waiting for a repair or service you’ll have access to many accommodations, such as:

Many flavours of coffee, espresso, tea and hot chocolate.

Up to date magazines for all tastes.

For customers who require transportation, we offer rental cars at a discounted price of $24.95 per day.

It’s not just my philosophy, it’s our everyday practice.

My goal is very simple, we are here to service your vehicle using the latest equipment available, superior parts and mechanical experience that puts us ahead of our competitors. I want to provide our customers with a worry free experience.

Robinson Automotive stands out from all the rest because we put our customers first by providing five assurances:

1. Investing in our staff:

I want to make sure that we have the most current diagnostic equipment and technical information, to quickly and accurately identify mechanical problems with your vehicle. Like a surgeon, we also must keep on learning so we can accurately repair your vehicle and prevent any problems down the road. Our staff is constantly updating their training on new equipment and automotive systems in order to repair your car properly the first time.

Our staff have an average of 25 years experience per person. They have seen and worked on every automobile and automotive problem you can think of. I pride myself in providing our customers with the highest skilled technicians possible.

Our service policy is very simple, we overservice because our customers are extremely important to us. We look after all the details to make sure you enjoy a worry free experience at our shop.

We will not explain a problem in garage jargon to you. We will explain our findings to you in clear and easy to understand language, explain our recommendation, provide a concise cost estimate and give you a completion time for the work.

The only surprises we all like are on our birthdays and special occasions, but not on your automobile repair. Once you approve our quote, you will not be surprised with additional charges. All repair costs and any supplementary work required must be authorized by you, it’s that simple. 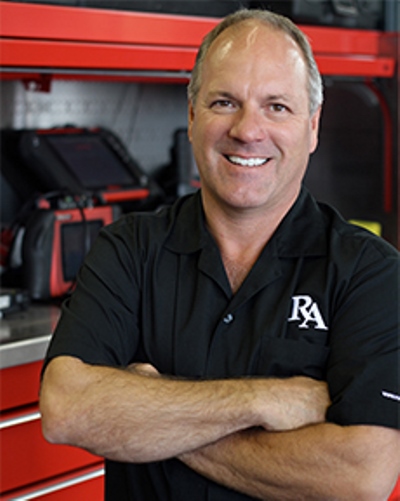 Kirk has owned and operated Robinson Automotive since 1988. After 30 years of experience in the Automotive industry, he knows all aspects of automotive repair.

Kirk is also the host of “Auto Experts” on Cogeco23, where he appears live every Wednesday night at 8:00pm. Kirk was also the host of AutoTalk on RogersTV doing live shows for over ten years. Featured in Moneysense Magazine, as well as the “Wheels” section of the Toronto Star. Kirk has been a guest on CTV, Global, The Learning Channel, “Silverman Helps,” and “Michael Coren Live” where he has helped consumers with their car questions and general automobile queries.

Kirk works with consumer protection groups such as the Ministry of Business Relations, the CAA, MTO, and APA to better the auto repair industry and to ensure consumer satisfaction.

For nearly fifteen years Kirk has been hosting live television shows where his panel discusses important topics in vehicle repair and answers viewer questions. Currently Kirk is hosting Auto Experts on Cogeco23 every Wednesday at 8:00PM EST. Kirk was also the host of AutoTalk on RogersTV doing live shows for over ten years.

Kirk has been a guest on CTV, Global, The Learning Channel, “Silverman Helps,” and “Michael Coren Live” where he has helped consumers with their car questions and general automobile queries covering topics such as fuel economy, winter maintenance, how the industry works and how to maintain your vehicle properly.

See what we've been up to!

Book your vehicle online, or by phone today!